Here is today’s piece from The Guardian about the the UK government’s “Childhood Obesity Strategy”.

The BBC joins in and says, it’s weak and watered down.

In April this year I stuck my head above the parapet and said I was not in favour of a sugar tax. I thought it was far too little and doubted the UK government’s commitment. Here’s the piece in Dentistry.

Because I dared swim against the perceived tide, I wanted to tax sugar, all sugar, where it comes into the food chain and not at the retailer, I have been contacted on several occasions by food industry lobbyists who wanted me to put my name to letters against the “sugar tax”. I was left in little doubt how strong and broad ranging these groups are. I declined any and all offers.

I committed much of my clinical career to prevention and the control of diseases, especially in the young, I take no pleasure in thinking, “I told you so”.

….Why be specific about drinks? Dentists have advocated a tax on confectionary for decades. We know that many confectionary sales are an impulse in response to advertising. Deal with that and get rid of sweets at checkouts and petrol stations.

Why not tax it in the supply chain with a levy on all sugar containing food ingredients? Tax sugar, high-fructose corn syrup, fruit juice concentrate and other added sugars at the point where they’re manufactured or imported, essentially taxing everything with added sugar, at a level appropriate to its sugar content.

Amongst the acolytes for a sugar tax is Jamie Oliver, whose recipe for “Scrumptious sticky toffee pudding” contains nearly 2lb of sugar. Shouldn’t the BBC be made to give public health warnings with every episode of The Great British Bake Off?…

…The belief that a tax will automatically lead to a reduction in obesity and related diseases is far too simplistic in my opinion. It will take other measures including the elimination of marketing and advertising of other junk foods. Above all it will take Government will to confront the food industry and to promote change in the hearts and minds of the country and with so many lobbyists and vested interests that’s not going to happen soon.

In the meantime dentists would be best advised to walk the talk, to limit their own intake, step up their patient education so it’s about general and dental health and vote for a government with a genuine commitment to health.” 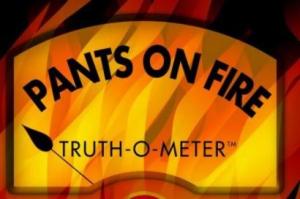 Sleep well in your flaming pants Mr Cameron, Mr Osborne and Mrs May and as for Jeremy Hunt….