I broke my phone last week. I was running to get in from the rain and it fell out of my jacket pocket hit a wall and then the pavement, slithered along for a few yards and came to a halt. Damage included a cracked back and screen; but the impact had caused it to split open and a number of small Apple components were left behind on the ground. It wasn’t the most up to date of iPhones – far from it (iPhone 3), I’m neither an obsessive about technology nor do I feel the need to validate myself by constant updating, but it did a good job.

My bank, RBS, unilaterally changed our joint current account a few years ago to their Select Silver account and I have taken advantage of the “perks” of HMV Music downloads, Love Film membership and travel Insurance that went with it. It was even greater value, because for some administrative reason of their own, they hadn’t charged us the £10 per month fee for membership until January 2014; possibly because I had complained about the lack of consultation regarding the switch, or it may be because they seemed to think I was an employee of RBS until 6 months ago.

One of the privileges of the account was mobile phone insurance so when I realised that I couldn’t fix the phone I gave them a call. I don’t like dealing with insurance companies I always feel as if I am trying to pull off some scam – I have never done such a thing. When my last BMW was written off by an anonymous A.N.Other whilst parked in a hotel car park, I was made to feel as if I had done it deliberately. So the delightful person from the RBS insurance helpline was a breath of fresh air. Sympathy, good engagement, and rapport. She talked me through the processes of getting a replacement phone, what I should do once it arrived, answered all my questions and smoothly took payment for the excess.

The replacement came from Carphone Warehouse. I received emails & texts to tell me that it had been dispatched, which courier company was being used and when I could expect my new phone. Simple, straightforward no fuss.

It’s the carrier that delivered the new phone that needs the real mention. I have been meaning to write about DPD and how good thay are since before Christmas. Some carriers presume that you have nothing better to do than to sit at home waiting for them. DPD email you as soon as your package is dispatched from the supplier so that you can trace its progress to their depot. They then give you a  time window of an hour when they will deliver. They give you the opportunity to ask them to deliver on a different day or to a different place. 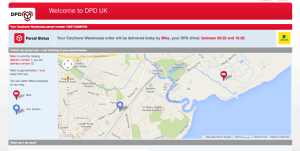 You can follow the progress of the delivery driver, on-line, in my case it’s Mike, as he gets closer to you.

until with a knock on my door, 22 hours after I had called to report the accident, Mike delivered my new iPhone.

I know this is widespread. I know loads of people have experienced it. I know that the technology is (in this day & age) straightforward. So why doesn’t everybody do what DPD does? I have spoken to Mike about their system and he tells me that customers love it and that the reception he gets is 99% positive (there is of course no way of pleasing everybody, not that you shouldn’t keep trying).

The conclusion from all three companies involved in this chain of customer service is that if they can do it so well and with such a minimum of fuss why can’t everyone.

Do you provide such a level of service? Or do you just like to think you do?

Is it enough to make someone like me write about and say “thanks” to RBS, Carphone Warehouse and DPD?