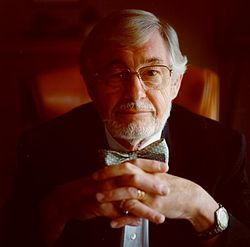 I was very sorry to hear of the death of Per-Ingvar Branemark who died on December 20th. at the age of 85. He had been ill for some time.

The discovery in 1952 that titanium would integrate with bone flew in the face of conventional thinking at the time. The finding which was by chance, as so many in science are. He was researching blood flow in the bones of rabbits and found that the titanium optical chambers of the microscopes could not be removed. He termed this phenomenon “osseointegration”.

I don’t know how the jump was made to the application in dentistry, Sverker Toreskog once told me that he had suggested it to Branemark over coffee one morning in Gothenburg, but Branemark constructed “fixtures” of pure titanium which were carefully inserted into the implant site. His first patient was Gosta Larsson and the fixtures were still in place at the patient’s death 40 years later.

The first presentation of his research work was in 1978, more than a quarter of a century after his initial findings. Such dedication to the research into the process of integration and its use in dentistry needed a team of physicians, dentists, biologists, engineers, metallurgists and physicists under Branemark’s leadership. His meticulous procedures and attention to detail meant that by the time he released his findings the procedure was already tried and tested.

Unfortunately dental implants had a very poor reputation until the discovery of osseointegration, with patients suffering from their loss and often being worse off than before treatment. So in may ways Branemark was swimming against the tide of opinion and history and was facing a great deal of scepticism from medical and dental colleagues. He struggled with funding for his research and was eventually funded from outside his home country.

The fact that dental implantology is now seen and taught as a part of mainstream dentistry is a testament to the rapid growth and great success of the procedures that he pioneered.

The world, not just dentistry, owes a great deal to this meticulous and dedicated man whose findings have brought benefits through increased quality of life to millions.

The man who made people smile. here