The US election campaign and subsequent coronation will grind on for another 10 months and appears from here to be more show biz than content. This time round Donald Trump has given us something to wonder about, marvel at or just shake our heads over.

In Ireland the general election was called last week, the election posters appeared overnight on telegraph poles, lamp posts and street signs the length and breadth of the land all bearing a candidate’s mug shot like nothing more than a nationwide hunt for a gang of serial killers.

Thank goodness for The Peoples’ Republic of Cork and their take on election promises and cliches.

I WILL DELIVER
If he is elected to Dáil Éireann he will deliver for the people of Cork and will deliver it on time. He can prove this because he once worked as a pizza delivery driver and when most customers’ got their food it was at the very least luke warm.

I WILL SPEAK UP FOR CORK
On one condition: he will speak up for Cork when speaking to the local media only. When it comes to a minister in his party announcing a another €20 billion upgrade to the M50 motorway around The Pale he will be only too glad to stand in the background of the press shots and nod approvingly. Any spare change for Cork there, lads? Thought not.

THAT’S NOT WHAT D’PEEPLE ARE SAYING TO ME ON THE DOORSTEPS
The opinion poll that says he has as much chance of being elected as the Father Mathew statue is completely wrong because he says the reaction he is getting on the doorsteps is completely different and he is very confident of topping the poll. Sorry, they’re all lying to you, bud.

I WILL FIGHT FOR JOBS
Even though he will be almost completely powerless and his party not in government he wants to make it clear that he will gladly fight anybody if it means even one extra job for Cork. And by fight, he wants it known that he will joyfully take off his top in the middle of Daunt Square at 2.30am and go at it with some langball from the IDA – even if that means spilling his curry chips all over the ground. That’s how committed he is. He’s amazing really, isn’t he?

I AM HONEST
At this point in his career he has yet to be given a brown envelope or have a big extension put on to his house in exchange for political favours so it is important to note the use of present tense here. His declaration that he is a man of integrity is by no means a guarantee of his future standards. A politician’s honesty is like a tax clearance certificate – it is only a statement about the present.

I WILL BE WORKING FOR YOU
That’s quite impressive because we’ve never met, you’ve never met us and we’ve never heard of you. But look, we appreciate the offer and there’s a load of soggy leaves blocking a drain around the side of the house – as you say you work for us, would you mind tending to it please?

I WILL FIGHT FOR CORK AIRPORT
This is always a good opportunity for government election candidates to drop in some off-the-shelf mind numbing clichés like “we intend to work with the stakeholders” and “set ambitious targets with our strategic partners”. It’s important to create a bland and boring statement so people don’t realise that
you have as much influence in adding new routes out of Cork as Rory the seal who lives under the Shandon Bridge. And to be fair Rory is pulling his fair share of tourists.

I WILL RESTORE LAW AND ORDER IN CORK
For opposition candidates on Leeside it is very unhelpful that Cork is one of the safest counties to live in and that violent crime is very low. But statistics can be sidestepped by shouting that robberies, murders and assaults are all “getting out of hand” and sentencing “needs to be seriously looked at”. He’ll build loads more prisons, double the number of Gardaí, give them machine guns, put CCTV on every street and put electronic tags on everyone called Majella and Darren.

LET’S STOP THE OBESITY EPIDEMIC
He says all the right things but the wobbly flesh dangling from the bottom of his chin that flops around when he moves his head and the big belly wobbling out through his blazer speaks a lot louder than the phrases his party whip handed him to learn off before the interview.

I WILL FIX THE DUMPING PROBLEM IN YOUR AREA
He will never ever suggest that the people who have mounds of litter blowing up against their front doors and all around their estates should perhaps, put down the remote control and the chicken suppers and waddle outside to clean it up themselves. He’ll sheepishly agree with them it’s a disgrace that the council only clean it three times a week and should be “doing more”.

VOTE FOR STABILITY
The condition of your grandmother on the trolley in CUH is stable. Your dole payment is stable. The walls of the hotel room you and your family live in are stable. Why would you want things to change?

WORK ON THE EVENT CENTRE MUST BEGIN SOON
Oh dear God, spare us.

What they really mean… 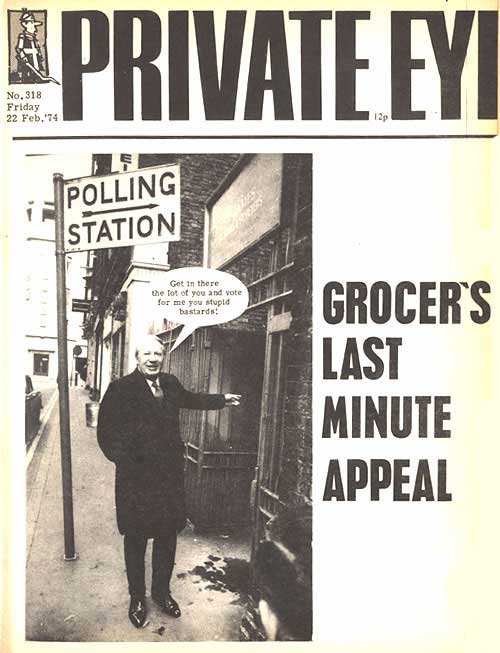