A fascinating book about an intriguing and important study. Reviewed in The Guardian. 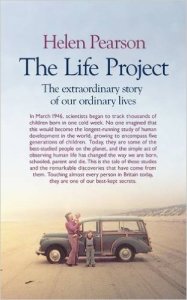 In March 1946, scientists recorded the birth of almost every British baby born in one, cold week. They have been following thousands of them ever since, in what has become the longest running major study of human development in the world. These people – who turn 70 over the next two weeks − are some of the best studied people on the planet. And the analysis of them was so successful that researchers repeated the exercise, starting to follow thousands of babies born in 1958, 1970, the early 1990s and at the turn of the millennium. Altogether, more than 70,000 people across five generations have been enrolled in these “birth cohort” studies. No other country in the world is tracking generations of people in quite this way: the studies have become the envy of scientists around the world, a jewel in the crown of British science, and yet, beyond the circle of dedicated researchers who run them, remarkably few people know that they even exist.

A fascinating review of an even more intriguing book about the changes that have taken place in UK society over the past 70 years. The book looks at social, health, education, the effects of ageing and a great deal more. To sum up the first four decades:

The book looks at social, health, education, the effects of ageing and a great deal more. To sum up the first four decades:

40’s Birth – it is quite clear how poor conditions for mothers and babies were in the pre-NHS days, “the babies in the lowest class were 70% more likely to be born dead than those in the most prosperous”.

60’s School – and the results led to the introduction of comprehensive education – the jury is still out.

70’s Smoking – one huge change in my adult life has been the awareness of the danger and the subsequent decline of smoking.

80’s – Obesity – it seems that obesity is not a new phenomenon and started with all cohorts at the same time – whilst we watched.

…..and so it continues as the members of the cohort enter their 70s.

A wonderful research project – if just for the wide ranging topics they examined, and the storage of all the physical data. Whoever had the idea for this study should go down in social history.

The cynic in me wondered about how much easier it would be to do this research today but that it would probably only be done in order to sell the results.*

…and for once the comments following the book review are worth reading.

The book is available here.

*PS I also reflected on all the data that used to be stored by The Dental Practice Board and then analysed by epidemiologists and other researchers, this habit was swept aside by the philistines in 2006 – stand up the CDO.