I was listening to Simon Mayo’s programme on Radio 2 a few minutes ago and I heard him interviewing John Nicholl from A.F.Huddlestons Butchers in Windermere. Last Wednesday they won “the national title of supreme champion at the British Pie Awards” for their beef and vegetable pasty known as “The Grafter”. Their butcher’s business employs three people John, his wife, Elspeth, and another man.

Here’s a report from the local paper.

I think we can all congratulate John and his team on their success, especially as John took a break to speak to Radio 2 whilst making the 48 Grafters for tomorrow’s sale. In view of the publicity they will probably sell out in short time, but as they have no more space on the premises they can’t make any more pies and pasties. 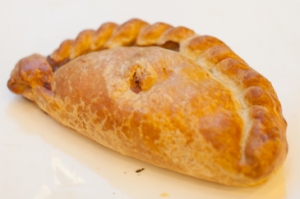 So what’s the point of writing about this? I wonder if through the length and breadth of Cumbria and the North West there are loads of grumpy butchers and associated pie makers chuntering to each other on social media, the Great British Pie bulletin board or at local BPA (British Pie Association) section meetings, “it’s all a fix”, “you only win if you buy tickets for a table”, “won’t catch me going to London for one of those fancy affairs”, “I could win if I entered”, “a mate of mine ate one once, nothing to write home about”, “I’m reporting him to the GPC (General Pie Council) for unfair advertising”, “my clients love my pies that’s why they come back for them” etc etc….

You have to admire John & Elsbeth for being prepared to step up to be judged and above all being ready to lose.

Nothing ventured. Nothing gained. We all do what we can to earn a crust.