Why should a “law” described first in 1908 be relevant to everyday Dentistry (and more)?

Robert Yerkes and John Dillingham Dodson described their tests with rats that could be encouraged to complete a maze when stimulated with slight electrical shocks. When the strength of the shocks was increased however the rats just ran about looking for an escape. They concluded that arousal levels helped to focus attention and motivation on the task at hand but only up to an optimum point and after that point fatigue appeared and performance declined. 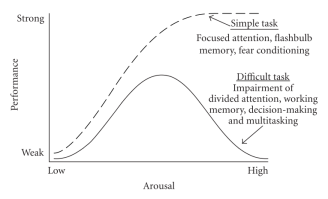 The first image shows the classic inverted ‘U’ shape of a difficult task (placing implants, molar endo, treating some children are examples that come to mind). It also shows a continuation without decline of more simple tasks which can be maintained for longer without reaching a point influenced by fatigue (examinations, routine restorations on well adjusted patients).

The second image shows the typical “stress curve” where performance takes a while to peak if we are under too little stress, then goes through a short period of optimum stress before reaching too much and heading down through exhaustion to burn out.

The reason that I have written about this is that we need to look at the time periods that these curves represent from the short (an hour say) to long (months or even years). There are different challenges that dentists face with differing solutions.

Firstly of course there is the fatigue that comes from trying to do too much challenging work in a short period of time. This results in high stress levels and possibly poor performance on a daily basis. Often there are time management issues where we are obliged to match our performance to the patients availability. This can see a clinician “coasting” by dealing with the relatively straightforward whilst at their peak in terms of readiness and responsiveness but then having to find reserves of energy when the patient “demands” treatment at later times in the day. I have never understood why dentists are reluctant to tell the patient exactly when and why they would like to see them. My own experience in a practice with large numbers of children was to insist on seeing under 11s for any treatment (examinations excepted) first thing in the morning. For the most part when people have reasons explained to them and can understand that it is for their benefit then they will comply with your wishes.

Also to consider are the long term problems of fatigue that arise from the day after day, just doing it without time off. Even in the best time managed (at a relatively micro level) practice if there is often not enough time spent away to unwind, recharge the batteries and recover, then burn out will creep up on you. The prodromal signs are a lack of efficiency and, more importantly, effectiveness.

Dentistry is still a macho occupation for many who seem to get a perverse enjoyment from overwork. It’s sad but true that for many there is an opportunity to build the life they want but put obstacles in their own way as if frightened of taking control.

Time management on both micro and macro levels is hugely important, ignore it at your peril. Get help if you need it.