Another unfinished blog from the archive sees the light of day. This one was inspired by THIS from which I quote.

I have worked with clients, and for people, whose answer to everything is to “reorganise, start again, throw everything in the air and see where it lands”. This of course means that their lives are full of re-starts, new starts and fresh starts. It makes them feel better but often improves very little because the things that need to change are rarely addressed. They are too busy making plans, talking about the jam tomorrow will bring instead of planting the raspberry canes today, watering them tomorrow, staking them the next day, picking the fruit when it’s ripe, etc

Of course some change, the right change, is a good thing; but activity for its own sake is pointless.

They remind me of an old friend of mine who confided that his parents had been right to try to stop him when he married his pregnant girlfriend because, “it was the right thing to do”. A dozen years, four house moves, three different towns, multiple job changes, and another child later he accepted that they were incompatible and they divorced. He thought that new starts, without changing anything else, without addressing the underlying problems, would make the difference.

“Solving problems almost always starts with ensuring you’re solving the actual problem. When the actions we should take are not obvious, or the problem is difficult, it’s easy to feel the need to do something … anything. We convince ourselves that motion is better than inaction. The choice, however, isn’t between action and inaction. This is a false duality. There is a third option that often makes the most sense.”

“Motion is easy. Results are hard.”

If you’re paying a coach listen to them… 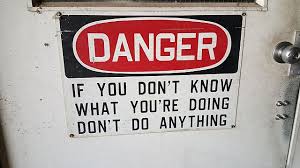