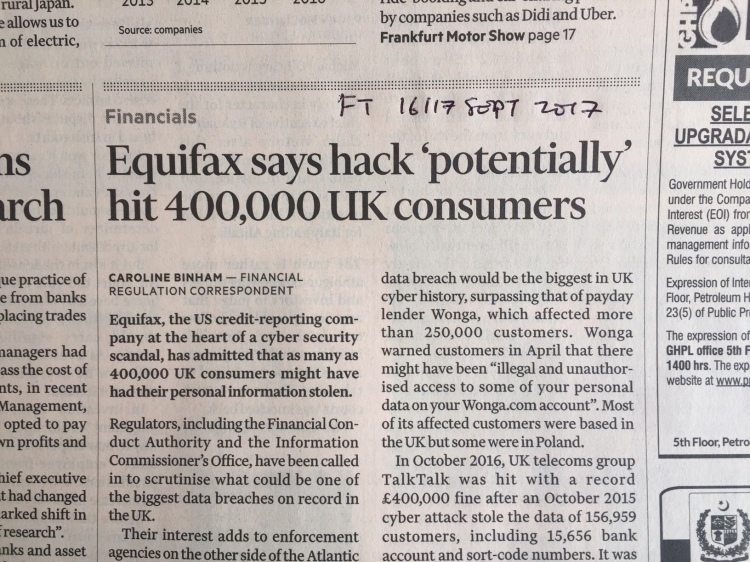 Picture this – one dentist manages to lose one set of notes of one patient, who was one month old, who had made one visit to the practice as an emergency and treatment consisted of examination and parental reassurance. The notes are passed to a recognised third party for disposal but turn up on a patch of waste ground. The CQC and the GDC would be involved and that dentist would probably go through months of anxiety whilst it was decided how big the case was for them to answer.

Meanwhile…. “sometime between mid-May and July, Equifax was hacked via a security flaw in the Apache Struts software that it used to build its web applications. The flaw, which gave hackers an easy way to take control of sensitive sites, had been fixed on 6 March and patches were made available to every organisation that used Struts. That meant, as various commentators pointed out, that Equifax’s IT department had the tools to plug the security holeand two months in which to do it. For some reason, they didn’t.

As a result, the hackers were able to steal the personal information of 143 million Americans. It is the most important financial data available on any citizen – names, dates of birth, social security numbers, home addresses and in some instances a lot more, including credit card details of more than 200,000 US consumers (and some UK consumers). It’s everything you need to engage in identity theft on an epic scale. “On a scale of 1 to 10 in terms of risk to consumers,” said a fraud analyst at consultancy firm Gartner, “this is a 10.””….

…Equifax discovered the breach on 29 July, but didn’t reveal it publicly until 7 September, no doubt because the internal investigation was long and complex. During that period, however, three of its senior executives unloaded shares in the company valued at $1.8m. But this, apparently, was completely coincidental: the poor dears (who included the chief financial officer) were not aware that an intrusion had occurred when they sold their shares.

…..if some poor unfortunate forgets to pay a library fine and then discovers that they can’t get a loan because a check on Equifax’s database reveals the payment lapse, well… that’s just tough. If you want to understand the populist revolt, then this is a good place to start.